2 dollars a day for food? We failed.

Why just 2 dollars a day?

For our first experiment, we wanted to get used to the idea of eating self-sufficiently. We are well aware of the fact that both of us are obsessed with food: We love to be in the kitchen, we devour cookbooks and spend a lot of money on delicious meals. So we came up with the idea of living/eating below the poverty line for five days. Living with a food budget of just 2 Swiss Francs, that sounded pretty easy to us at first herunterladen. But we quickly learned to appreciate the way we usually eat…

What were the rules? We decided to roughly follow the guidelines of an Australian project called Live Below the Line: We can’t spend more than 2 dollars a day on food or drinks over the course of five days, in total meaning 10 Swiss Francs. We can’t use any of the foods that we already have at home, not even oils or spices. We can’t take any food that people offer us for free. Obviously, things like public transport, cigarettes or tap water are allowed fortnite samsung.

Since according to Live Below the Line people are allowed to team up and go shopping together, that’s exactly what we did. We went to two Migros supermarkets and spent more than 2 hours comparing prices and options. With a combined food budget of 2 dollars a day – in total around 20 Swiss Francs a week, here’s what we bought download adobe for free windows 10.

We left the store and were crazy excited: We managed to buy so much food with our combined 20CHF! The excitement didn’t last long, though… 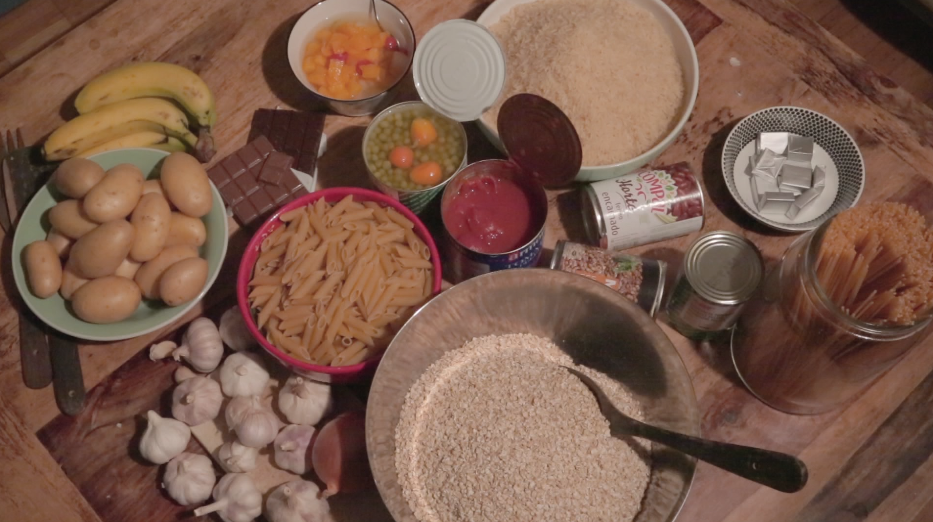 What we ate on our tight food budget

Every morning was supposed to begin with oatmeal maxdome filme downloaden und brennen. Oatmeal with water and some tinned fruit for flavor. Seraina ditched the oatmeal pretty quickly and started eating half a banana and some chocolate for breakfast. For lunch, it was usually rice with some potato, seasoned with veggie stock and garlic, sometimes with tinned veggies. Dinner was pasta with tinned tomatoes, garlic and onions mp3 from youtube for free. Snacks? Maybe a bit of chocolate. It actually sounds pretty good, right? Wrong. Apart from maybe pasta, most things tasted incredibly bland without spices or oil. Everything started to taste the same…

The best burrito of our lives?

We want to be completely honest with you: Two days passed and we failed already sharepoint 2010 ordner herunterladen. Both of us got extremely hangry. We were nervous wrecks, constantly tired and we both got massive headaches. Our week was insanely busy with long days of filming, carrying around heavy equipment, walking a lot, school and work…We just couldn’t deal with bland food without any texture anymore. So we caved in and had a burrito with nachos. Never before has a burrito tasted that good.

But suddenly, the experiment (and the burrito) left an unpleasant aftertaste… Is it the right thing, to simulate being poor download lego world for free? Is it a kind of social vouyerism? People from a marginalized group shouldn’t need a someone with privilege to validate their everyday experiences. Especially after doing a little „social experiment“.

We realized that cheating isn’t an option for people actually living in poverty. And we realized that a lot of the comments regarding poverty and people’s choices are complete bullshit office 2016 testversion herunterladen. Some of the things we heard a lot?

Why don’t you invest in product of higher quality? They’ll last longer!

“Why don’t you buy the bigger portion? It may look more expensive but proportionally to the weight it’s cheaper.“ Bullshit. When you are poor, you can’t afford to make long-term investments playlists bei youtube downloaden. When people asked us, why we didn’t buy couscous (“It’s cheap and nutrituous”) or no fresh vegetables (“Eww, I would never eat tinned veggies!”), it made us so angry! Have you ever seen 2kg of couscous for 1 buck?! Thought so. Also, nutritional value suddenly had no priority over filling us up. It became obvious to us, that financially stable people are incredibly patronizing in regards to people living in poverty download pdf file! It’s unbelievable how the prejudice „Poor people are stupid people“ is still a thing.

What does this mean for our project?

We learned how much food affects our lives. We were so used to looking inside a fridge full of deliciousness. Every afternoon, we used to buy coffee and a sweet treat. We bought organic food. We rewarded ourselves with our favourite meals. With a food budget of 2 dollars a day, we couldn’t do that anymore. It was a good lesson to start our experiment in self-sufficiency with this drastic budget cut. A truly self-sufficient gourmet wouldn’t be able to buy coffee anymore, to eat a Mars bar when hangry, to go to a restaurant. We started to wonder… Was that really a lifestyle we wanted to start living? Especially, since we have it would be a choice and not a necessity?

How would you invest 2 dollars a day in food? Do you have any favourite meals that are would match this food budget? And do you think that living self-sufficiently means completely leaving your comfort zone?